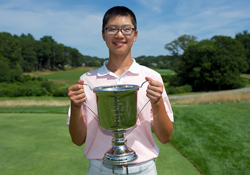 MANCHESTER - One player finally broke through at the 2013 Massachusetts Junior Amateur Championship yesterday at Essex County Club, while another just kept re-writing the event’s history.

Salem Country Club’s Steven DiLisio, meanwhile, finished fifth overall with a 7-over par 217, but also kept his trophy streak alive at the Mass. Junior by winning the Pre-Junior Division for the second consecutive year. DiLisio has now won his division the last five years, conquering the Boys Division from 2009-2011.

After the trophy presentation, the moment was not lost on the even-keeled Lei.

“What do you have, five of those now?,” Lei asked DiLisio, pointing at his trophy before the pair posed for photos together. “This is my first one.”

Heading up the 17th fairway, DiLisio felt like he might still be in the running for the overall title, but he narrowly missed a birdie putt there and suffered another unfortunate break on the 18th hole. His tee shot strayed into the fescue just off the right side of the fairway, and his approach sailed over the green into more high grass.

While looking for his ball DiLisio inadvertently stepped on it and had to take a penalty, ultimately finishing with a triple bogey.

Lei, meanwhile, made his move on the 15th hole, rolling in a 40-foot birdie putt to gain sole possession of the lead. He finished with three straight pars to close it out.

“This is probably my biggest win,” Lei, a Middleton resident, said. “I’ve been playing this tournament for years and always tried to win, but this is the first time that the dream really came true.”

Lei finished third in the Boys Division twice, each time behind DiLisio.

While the 15-year-old DiLisio hoped to win the overall title for the first time, he was glad to collect more hardware.

“I’ve had a good summer so far. I’ve kind of figured out how to keep the bad days not so bad and just start focusing on going real low. I had an opportunity today, but it just didn’t quite turn out the way I would have liked. But it means a lot. I really enjoy these tournaments; they’re some of the best run tournaments I play in all year. Even the AJGA (American Junior Golf Association) national tournaments, they’re not run much better than this — if at all.”

Through three rounds DiLisio seemed to be stuck in the middle ground between playing great and playing himself out of contention. For the most part, he avoided bad shots and recovered well when in trouble.

“I haven’t been striking it exactly the way I would like to. I’m going through a pretty big growth spurt and not exactly making the contact I want, or hitting it exactly where I want. So, you know where some kids are hitting driver or 3-wood? I’m hitting irons,” said DiLisio, who has grown five or six inches this year. “That really helps me not get those 78s, 76s, and 80s into play. I really try to let my putter and wedge game make the difference.

“I was going pretty well today, too. I made a lot of putts, but I just didn’t finish the way I would have liked.”

Lei finished well, keeping his focus and drawing confidence from playing with Lang and Naumec. Lang came into the third round with a one-shot lead and Naumec got hot on the front nine, carding birdies on holes 5, 6 and 9.

“That definitely helped me,” Lei said. “Jackson and Matt were both hitting good shots and we were basically even through the tournament, but the last few holes I really started to focus a lot more and I knew how to do something in order to have the title. They helped me stay focused.”

Lei made bogey on holes 4 and 13, but each time earned the stroke back two holes later.

DiLisio got hot on the final five holes of the front nine. He birdied the par-5 fifth, narrowly missing an eagle putt, the par-4 sixth, and the par-4 ninth. He made the turn with a 1-under par 35 and, except for a bogey on the par-3 11th, played the back nine nearly incident free.

The 18th hole plagued DiLisio all week, however. He took a penalty stroke in the opening round when he grounded his club behind his ball on the green and it moved. He also missed a short par putt in the second round. His triple bogey yesterday cost him at least a couple strokes.

“It’s not that hard of a hole; I just can’t get out of it with a good number,” DiLisio said. “The first time when the ball moves like that, I lipped out the birdie so I didn’t feel too bad about that one. Today, I’m sitting in the fescue from 110 yards out and it just came out like a flyer. I can’t hit a 52-degree wedge 125 yards in the middle of the fairway, so it just came out like that. Then, I’m in there (behind the green) searching for my ball and it’s up to my knees and totally covered. The only reason I probably found it was because I stepped on it.

Essex County Club’s Jon Seward had a tough day with a 10-over par 80, but he finished in a tie for 10th place with a three round total of 225.

DiLisio’s St. John’s Prep teammate James Turner, who plays out of Bass Rocks, made the biggest move among locals shooting a 6-over par 76 and finishing in a tie for 29th.

Lei, a rising junior at Phillips Exeter Academy, felt the talent of the field only added to his accomplishment.

“I was third a couple times (in the Boys Division), but I never played too well those times. Today, I definitely sealed the deal,” Lei said. “I knew I’d have to play good. It’s a strong field, the best players in Massachusetts are here so I had to play solidly. I had to play smart and keep trying.”

Back
The perfect place for a dream come true. Plan the perfect event